OGG, MCO, SNA? Here’s How Airports Got Their Codes 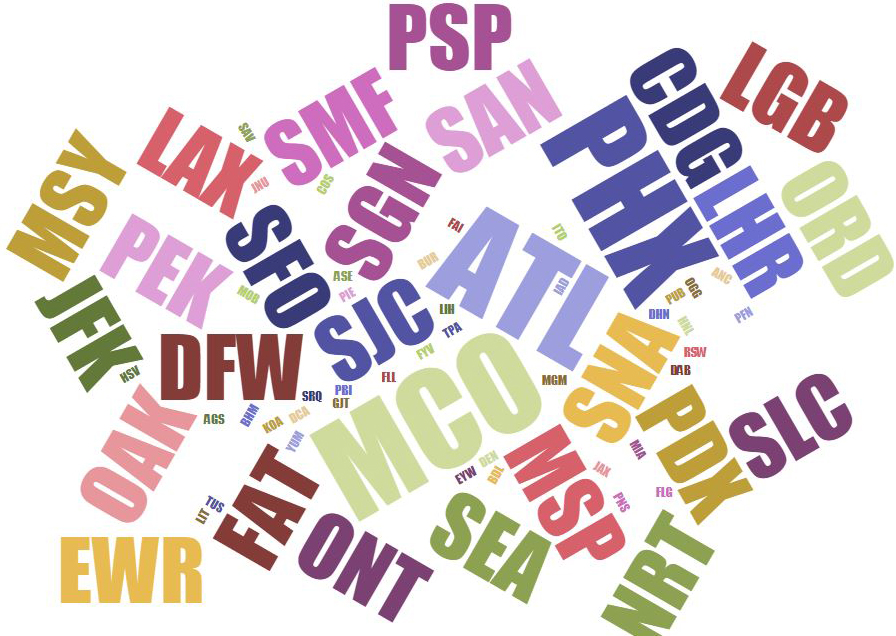 Some are pretty easy to decipher – take ATL (Atlanta) and SEA (Seattle). But others are a little less obvious – why is Orlando known as MCO? Here’s a brief history of how airport codes came to be.

In the first decades of flying, there weren’t many airports. The few that existed went by a city’s 2-letter National Weather Service code. For example, San Francisco was SF. But as air travel expanded, the 2-letter combinations ran out, so airports were assigned 3-letter codes instead. This increased the number of possible codes from 650 to 15,600.

Ultimately, there is no standard method to assigning codes, but there are a few patterns.

Some were derived from the old 2-letter codes, with an X added – for instance, LAX (Los Angeles), PDX (Portland), and PHX (Phoenix). Other fairly straightforward ones come from the first letters of cities or counties: DFW (Dallas-Fort Worth), MSP (Minneapolis-St. Paul), and SLC (Salt Lake City). SNA (John Wayne Airport) may seem odd, but the code actually comes from Santa Ana.

For certain airports, the city’s former name is the clue: Ho Chi Minh City goes by SGN, after Saigon. Beijing used to be called Peking, hence the code PEK.

Many codes come from the airport name rather than the city name. Think of CDG for Paris – named for the famous WWII general Charles de Gaulle. Similarly, there are LHR (London-Heathrow), JFK (New York-John F Kennedy), and NRT (Tokyo-Narita).

Some seem bizarre until you go back to an older, now-defunct name. That’s how Orlando got MCO – from McCoy Air Force Base. By the same token, Chicago’s ORD comes from the former nearby town Orchard Place. New Orleans’ MSY got its code from the Moisant Stock Yards.

And for those of you heading to Maui and scratching your head at OGG (Kahului Airport), this designation honors a Hawaiian Airlines captain, Jimmy Hogg.

Talk to your Stellar Travel advisor for more insider tips and help navigating the complex world of air travel!

Seatac Upping its Gourmet Game with these New Restaurants

Sustainable, hand-crafted, farm-to-table – these aren’t usually words used to describe airport food, but Seatac is hoping to change that. The Seattle-Tacoma International Airport is rolling out a huge overhaul of its dining scene, scheduled Read more…

Skytrax released their annual ranking of the world’s best airports.  For the 5th year in a row Singapore’s Changi airport took the top spot followed by Tokyo Haneda, Incheon, Munich and Hong Kong.   US Read more…

No longer wonder what happens to your luggage when you check it at the airport!  Watch this new video from Amsterdam’s Shiphol Airport, they strapped a 360-degree camera to a bag and filmed the its journey Read more…