The following article appeared in the New York Times and mirrors the experiences of many of our clients. Give us a call next time you need help sorting through the myriad of travel options on the web. We are at your service! 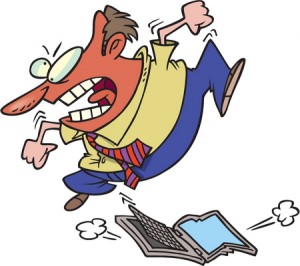 If you dreaded sitting down at your computer the last time you made travel arrangements or felt frustrated by all the time and effort it took to sort through pages of results for flights and hotels, join the crowd.

A new report, to be released Tuesday by Forrester Research, found that far from embracing the do-it-yourself era, many consumers were fed up with the complicated process of planning and booking travel.

Instead, customers are forced to figure out extra fees, wade through fine print and understand industry terms like the difference between a deluxe and a standard room, in addition to educating themselves about destinations, flights and hotels, Mr. Harteveldt said.

“Travel companies expect the consumer to behave like a travel agent,” he explained. “The question I always ask these guys is, ‘Could your mother-in-law use your Web site without having to call you for help?’ The answer is always no.”

In fact, Mr. Harteveldt said a growing number of consumers appeared to be interested in using an offline travel agency, if they could find one.

“The fact that there are more people now who would consider using a good offline travel agent is telling me people are saying, ‘Enough already,’ ” he said.

Frustrations with various aspects of the travel experience are showing up in other research as well.

In late June, J. D. Power & Associates released its annual airline survey, which found that customer satisfaction had declined for the third consecutive year. Based on responses from 12,900 passengers, the airline industry scored 658 points on a 1,000-point scale this year, down from a peak of 692 in 2006.

The Power survey asks travelers about issues like the courtesy of gate agents and flight crew, aircraft cleanliness, frequency of in-flight updates, ticket prices and fees. Recent fare cuts have not yet improved the airlines’ image.

“Actually, passenger satisfaction with costs and fees is down from last year,” said Dale Haines, senior director for the travel practice at J. D. Power, pointing out that fees for checked bags or services like booking by phone can wipe out any savings on the ticket price.

The latest figures from the Department of Transportation show that the average domestic fare was $315 in the first quarter of 2009, a drop of 12.5 percent from its peak of $360 last fall.

“The fact that airfares have gone down from their peak frankly may not be resonating,” Mr. Haines said.

By contrast, the latest J. D. Power hotel survey, released last week, rated the industry 756 out of 1,000. That number captures a wider variety of products than in the airline industry (ranging from economy to luxury hotels), and has been “fairly constant over time,” said Michael Drago, director of the hospitality and travel practice at J. D. Power.

Another widely followed survey, the American Customer Satisfaction Index, has been tracking airlines and hotels annually since 1996, most recently gave the airlines a 64 on a 100-point scale (a slight improvement from 2008) and the hotel industry a 75 (the same as last year).

“The airline score has gone up a little, but it’s still not very good,” said Claes Fornell, a business professor at the University of Michigan and creator of the index. “Compared to most industries, the airlines continue to underperform.”

The airlines that consistently score at the top of these types of customer satisfaction surveys are Southwest, JetBlue and Alaska Airlines – all three are among the airlines that reported a profit in the second quarter.

As the industry faces what may be a prolonged passenger decline, analysts say companies are under greater pressure to address travelers’ concerns.

“Do you really want to run a business where you’re annoying one out of three of your customers?” Mr. Harteveldt said. “My concern is that this frustration could continue to grow.”

Even the industry’s main trade group, the U.S. Travel Association, has been recognizing the financial impact of what could be called the “frustration factor.” Its survey in May 2008 found that more than a quarter of travelers had avoided at least one trip in the previous year because of the air travel system.

“Before the recession hit, you couldn’t turn on the nightly news without more discussion about flight delays and other air travel hassles people were having,” said Geoff Freeman, senior vice president for public affairs at the association.

The trade group says the root of the problem is an outdated air traffic infrastructure, and has been pushing Congress to finance projects to update air traffic control technology to reduce delays. Some of these initiatives, which could take years to develop, are included in Federal Aviation Administration reauthorization bills under consideration.

In the meantime, despite some improvements in airline performance because of a decline in the number of people traveling, Mr. Freeman acknowledged that frustrations remain – especially among the customers the industry counts on for its survival.

“Those who travel the most frequently are those who are most frustrated with the inefficiencies in the process,” he said. “As a society, we need to be thinking, what is the cost when someone says it’s not worth it to travel?”

Categories: Why you need a travel agent

Here’s How Traveling Leads to Smarts and Success

We could wax poetic about the benefits of travel all day long – of course, here at Stellar Travel we may be just a little biased. That’s why we were happy to see a scientific Read more…

A positive way to spend May 4th, Travel Agent Appreciation Day, is to enjoy the savings.  The American Society of Travel Agents (ASTA) research proves that by using a travel agent consumers save on average Read more…

We Help You Get More

First-time clients often ask, doesn’t it cost more to use you?  Usually, it costs less because we will uncover options you didn’t consider or arrange a valuable complimentary upgrade.  Our professional planning fees are very Read more…